What is an e-bike? 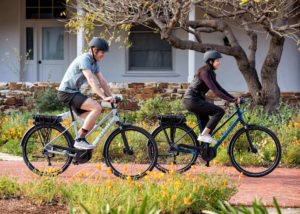 E-bikes have grown in popularity the last few years, and for good reason.  They’re fun, economical, practical, and helpful.  E-bikes come in as many varieties of styles and uses as regular pedal bicycles – road, gravel, leisure, mountain, you name it, there is an e-bike version.

Some of you may be out of the loop and may ask what an e-bike is.  Well, that’s actually a good question, and not always easy to answer!  Is an e-bike a bicycle or is an e-bike a motorcycle?  People argue endlessly which.  So we’ll start the conversation here on what exactly defines a particular two-wheeled vehicle as an e-bike.

An electric-assisted bicycle (e-bike) essentially is a bicycle with an electric motor that gives additional assistance to the rider to enable them to go faster with less effort.  But the definition of what constitutes an e-bike varies depending on your location.  In Virginia, an e-bike is considered a bicycle and can generally go anywhere a bicycle is allowed provided it meets the following criteria: the assistance is only engaged while pedaling (so no throttle), and the assistance cuts out at 25 mph.  If the e-bike has a throttle, it is technically considered a moped and must be registered with the DMV.

As for whether it is legal to use an e-bike can also vary by location.  Local ordinances can restrict their use, so you’ll sometimes see no e-bike signs where regular bicycles are allowed.  Federal lands have been changing where they allow e-bikes, and generally allow them anywhere cars can go, but often don’t allow them on singletrack trails where regular mountain bikes are permitted.  The George Washington National Forest and Jefferson National Forest currently consider e-bikes to be motorized and do not allow them on most singletrack, though that may change in the not-to-distant future.

Let’s go back to why you might want an e-bike.  For the majority of customers we sell e-bikes to, making the steep hills we have around here less daunting is their major concern.  The steep hills can be quite challenging, and many are just looking for a fun, leisurely ride around their neighborhood or on quiet back roads.  They can turn the assistance up on the ascents and down on the flats to get a nice ride without over-exerting themselves or having to walk.  Some customers have been serious riders for decades, but age is starting to catch up to them, and an e-bike allows them to continue to ride the same rides they always have.

Others are using the e-bikes for commuting.  Short trips around town can often be easier and faster (and less frustrating) on a bicycle than in a car.  An e-bike makes those trips even easier and keeps you from being overly sweaty when you arrive at your job, store, etc.  An e-bike is not only more environmentally-friendly than a car, it is more wallet-friendly, too.  My own rough estimate is that every short ride on a bike or e-bike used for commuting instead of the car saves $1-2.  That can add up to hundreds, even thousands of dollars in the course of a year.

One of the most common questions we receive concerning e-bikes is how long the battery lasts.  The higher end bikes like the Gazelles and Giants will often last upward of 60 miles on a charge.  A couple models will last over 100 miles!  For most people, that is plenty of charge for several rides.  Even the entry-level e-bikes we carry will usually last at least 20 miles, so at least a ride or two.  And with the rechargeable lithium-ion batteries, they can be charged 500-1,000 times before the batteries start losing their capacity.

What questions do you have about e-bikes?  One of our staff would be happy to take the time to answer any questions you may have, and you can even take a test ride to see what they are like for yourself.