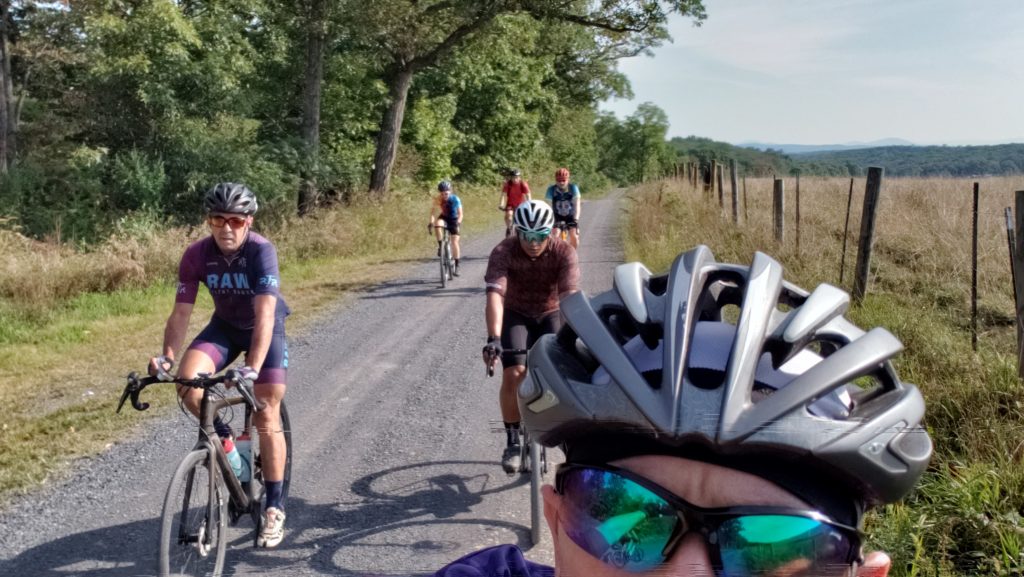 I love a good gravel ride.  And, apparently, so do many, many other people!  Gravel riding has gotten so popular over the last few years that manufacturers have been making gravel-specific bikes now.  Some of you may be wondering, though, what is the allure of riding on gravel?  And what makes a bike a “gravel bike”?

I find riding on gravel roads great for a variety of reasons.  First, unlike paved roads, gravel roads tend to be very low traffic.  Motorists tend to avoid gravel roads because they are rough and often have potholes.  But, generally, whereas potholes can be hard to avoid in a car, they are easily navigated around on a bike. So you get to ride for miles in relative safety without having to worry about cars.  And what cars do come along are traveling a lot slower.  You don’t get buzzed by a car going 55 mph on a gravel road!

Another reason I love riding on gravel roads is for the spirit of adventure.  Gravel roads tend to take you further away from city centers, really give you a feeling of being out in the wilderness.  Yet, getting back to civilization is just about as quick and easy as if it were a paved road.  You are still usually riding on a road that exists on a map, unlike some mountain bike trails.

Gravel roads also pose extra challenges to riding on pavement.  I enjoy working my way up a steep gravel climb.  It sometimes takes some finesse to keep the power down while not spinning the rear wheel out.  Conversely, it takes a bit more concentration going downhill, especially if there are any ruts or washboard sections on the road.  You can’t just zone out the way you can on smooth asphalt, and I like that.

“Ok, so my interest is piqued.  But why would I need a gravel bike just to ride on a gravel road?” you might ask.  The simple answer is that you don’t!  You can use whatever bike you currently ride, whether it is a road bike or a mountain bike.  However, a dedicated gravel bike has many advantages that make the adventure more enjoyable.

First, compared to a road bike, a gravel bike has wider tires.  Yeah, you can ride 23mm tires on gravel and dirt roads, but you’ll be more stable, get better traction, and have fewer flats on 35-45mm tires.  Standard road bikes just can’t fit that wide of a tire.  A mountain bike will certainly have wide enough tires to provide traction and stability, but mountain bikes tend to be heavier and slower than a road bike.  For several years, we had customers use cyclocross bikes for gravel riding; these work pretty well.  Drop bars, fairly narrow tires, but wide enough (usually in the 30-35mm range), so they are light and fast rolling.

However, even CX bikes have their shortcomings.  They have a race geometry, so are steep angled, low front end, with a high bottom bracket, 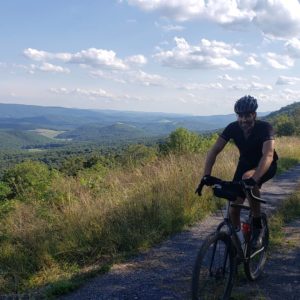 designed for zipping around a race course for an hour; many have no mounts for bottle cages or racks, etc.  Not necessarily the greatest for someone just looking to spend hours on the roads.  So companies have taken cues from their endurance road bikes and made them gravel-friendly, giving rise to the gravel bike.  Stable geometry designed to be comfortable for hours on end just like their endurance road bikes, but with clearance for wide tires.  And most have plenty of mounts for extra bottles, fenders, and racks.  Most gravel bikes can also serve as light duty touring rigs.

Judging by the number of gravel bikes on offer from manufacturers today, I am not alone in my love of gravel adventure.  For that matter, we probably sell 2 gravel bikes for every one strictly road bike here at Element Sports.  Gravel races, fondos, and other events have become very popular, too.  Not only do we put on the Gritventure! rides (link here and here), but I usually participate in several other gravel rides and races during the course of the year.  I like the gravel endurance rides because they tend to be laid back and fun while providing excellent support.  You’ll see me at GRUSK (Gravel Race Up Spruce Knob) this year, for example.  Another one I’m already registered for is Appalachian Journey down in Floyd County in April; it looks like a tough one, so it’s gotta be fun!

If you would like to learn more about gravel riding or bikes, stop on in!  We’d love to share some great routes and get you on a bike that will carry you through your next adventure!

← Wheel Truing Is it winter? Or summer? I’m confused! →