If you are like me, you like to see how fast you are going and how far you travel on your rides.  Others prefer not to know any data, and just want to get outside and forget everything.  In this blog, I’m going to discuss some of the devices and apps for recording rides and analyzing them.

For those looking for the simplest method of recording ride data, a bike computer with basic functions of speed, distance, time, etc. will be all you need.  These computers will generally be fairly inexpensive, starting around $25 and keep track of a minimum of data.  I prefer wireless versions of these computers because wired ones often get their wires caught on something and yanked and broken.  Then you have to buy a new wiring harness.  Wireless works well and you don’t have that worry; just a few more dollars up front–starting around $40-50.

A basic computer and a sheet a of paper is how I originally started recording data.  Simple, worked, but a little lacking, that’s for sure.  I had to add miles by hand if I wanted to see totals by week, month, or year.  A spreadsheet on a computer was the next logical step.

But now we have all sorts of methods!  My main app for recording my rides is mycyclinglog.com which is basically a glorified spreadsheet.  I can record a variety of info, and it calculates a lot of data.  I can also set distance goals and see how I’m going.  There are other apps, as well, which I’ll touch on in a bit after discussing devic 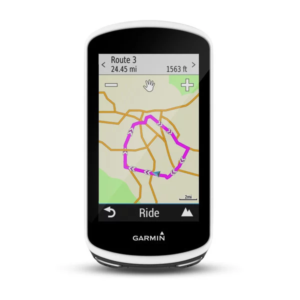 Eventually I moved on from a simple computer to something more advanced: a Garmin unit.  A unit such as a Garmin can keep track of a lot more data,as well as provide GPS and auto uploading to numerous websites and apps, including their own GarminConnect.  There are a lot of models, some fairly simple, some quite complex.  I own the Edge 1030, which is their current flagship model.  GPS, turn-by-turn directions, full mapping, workouts, course creation, and a host of others.  You can even download third-party apps onto the device to do even more with it!  Now, since smart phones usually have GPS built in, and there are a number of apps to enable them to record rides, many just use their phones.  Such apps include Strava, RidewithGPS, MapMyRide, etc.  However, I prefer not use my phone for a number of reasons.  First, a dedicated device is usually more accurate than the phone.  The devices are also smaller and take up less space on the handlebars.  They are usually less fragile than phones and more water-proof, too.  And if I do crash and break the device, it’s less expensive than my phone.  Of course, you can set your phone to record and shove it in a backpack or pocket where it will be protected, but then you don’t have access to your ride metrics while you are riding.  So I prefer a dedicated cycling computer.  You can see my Garmin attached to the bars in the pic of my bike below (in a blue protective silicone case).  It’s also easier with a Garmin to add other elements to your device for more data: Heart Rate Strap, Cadence Sensor, Speed Sensor, etc. 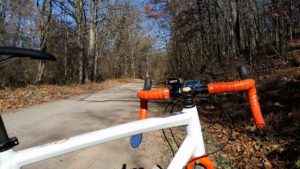 I mentioned apps to use for recording rides.  As I said, I use mycyclinglog.com to keep track of my total miles, elevation, etc.  The other website I mainly use is Strava.  Yeah, I use the others, but for various things.  I love Strava for its social nature and friendly competition.  You can kudos and comment on each other’s rides.  You can also create segments on your local routes that you can then race against others.  The fastest person is considered the King of the Mountain (KOM) or Queen of the Mountain (QOM).  But you can also break it down by age, gender, weight, friends, etc to see how you stack up against others.  My buddies and I will often push each other on segments, or we’ll go try to steal KOMs from each other when they’re not riding with us.  I do like RidewithGPS for mapping rides.  It’s the easiest to use and offers a lot of flexibility for routing and printing cue sheets, etc.  All of them do record your data, but I don’t find them as convenient as mycyclinglog.com when trying to see things at a glance; you kind of end up having to hunt around the site.  Strava also has some nice features if you are specifically training for events, like “Fitness and Fresheness,” etc..  There are other sites that do even more of that, but I’m focusing on ride tracking here rather than race training.

Of course, if you are looking for a device to record your rides with, we have them here at the shop.  From basic wired computers all the way up to fancy GPS units from Garmin and others.  We’re happy to help you sort the differences and find the best one for your budget.  And, of course, should you rather eschew collecting data on your rides, that’s perfectly fine!

Oh, and don’t forget to join the Element Sports Strava Club on Strava!

Top pic and pic of Garmin Edge 1030 taken from pages on garmin.com